In yesterday’s post I presented the movement in fourteenth-century  eastern Christendom known as hesychasm as a sort of foil (or contrasting device) against the disaffection that was stirring at the time among western thinkers such as Petrarch. The necessary link in this case was Barlaam of Calabria, the theologian who lived temporarily in Byzantium but fell out with the hesychastic current there and ultimately returned to his native Italy. There he converted to Roman Catholicism. Serving as Greek tutor to the illustrious Petrarch, it is conceivable that his agnosticism about the possibility of man experiencing the immediate presence of God in this world (what I call “paradise”) was passed on to his pupil, soon to be known as the father of modern humanism.

And so, we not only have a moment when a new stage in the history of Christendom is discernable–what I called the symbolical birth of utopia–but also an opportunity to reflect on what was being “left behind” in the old stage, represented as it was by the east. By this time, the Roman Catholic west had pretty much committed itself to what, to the Orthodox at least, appeared to be significant innovations. These included papal ecclesiology, scholastic theology, and doctrinal development (resulting in what had come to be called purgatory). As such, the west represented what might be called a “new Christendom,” and I will be spending time in future posts addressing it. But here I would like to say a few words about the “old Christendom” of the Orthodox east, and the important place hesychasm played in it. For it was this movement that not only embodied traditional Christianity’s conviction about the presence of God in this world, but insulated the east from forces that would eventually lead western Christendom into disarray.

To many historians in the west, hesychasm appears to be the ultimate expression of Byzantine obscurity, a slavish attachment to the tradition of the early Church. Indeed, advocates such as Gregory Palamas made extensive use of patristic sources and more or less rejected the new learning of contemporary Latin scholastics. Barlaam, though no stranger to the fathers, had himself followed a line of thinking that placed human reason in a position of autonomy relative to God. He certainly did not reject divine revelation. But he claimed human beings can use philosophy and logic to attain knowledge about reality on their own, for its own sake. Furthermore, immediate knowledge of God was impossible, due to man’s total subordination to the divine mind.

What Gregory Palamas claimed, following the tradition of early Greek fathers, was that while God’s essence is indeed unknowable, having become human in the incarnation he has deigned to share his energies with the human race, at least that part of it that has been sacramentally united to him through Jesus Christ. This was the central conviction of hesychasm. Particular practices of meditation involving what was called the Jesus Prayer (“Lord Jesus Christ, Son of God, have mercy on me a sinner”) and methods of meditation (concentrating attention on the heart and belly) were quite secondary, though they provoked sarcasm in critics like Barlaam. What the hesychasts actually stood for was the real consequences of the incarnation: that man can be totally united to God in a process called deification, by which everything that God is becomes joined to the believer through his sacramental life in Jesus Christ and the Holy Spirit. In other words, hesychasm was an optimistic assessment of the human condition, though one framed within traditional Christianity.

And it continued long after the fourteenth century as a source of inspiration to eastern Christian thought and culture. Perhaps its most vivid expression is found in iconography. The fourteenth century witnessed a flowering of Orthodox liturgical art, especially in painting. First in Byzantium, then in Serbia, and finally in Russia, iconography vividly expressed man’s capacity for deification–even in this world.

Perhaps this is best seen in images of Christ himself, whose incarnation assimilated human nature to divine nature, and thereby deified it. In Constantinople, the famous fourteenth-century frescoes in Chora Church included one of the resurrection depicting Christ’s body in a dynamic posture, raising Adam from the tomb.

The image of Adam is that of a transformed humanity, joined now with God through the incarnate and resurrected Christ. 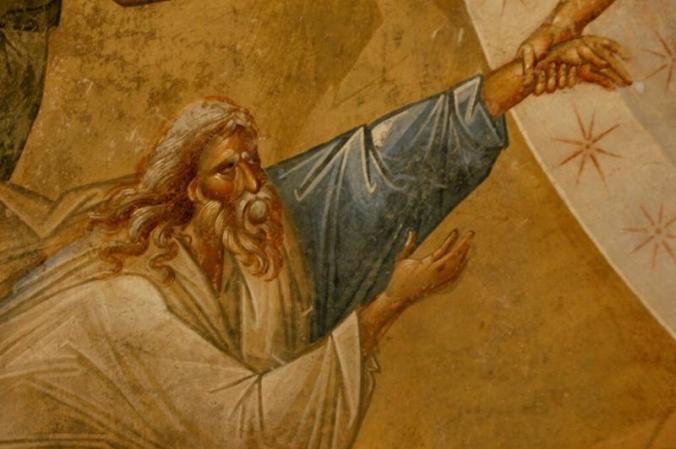 In Decani Monastery in Serbia, built later in the fourteenth century during the high point of hesychasm, Christ is represented in the transfiguration with a body that radiates the very uncreated light of God. 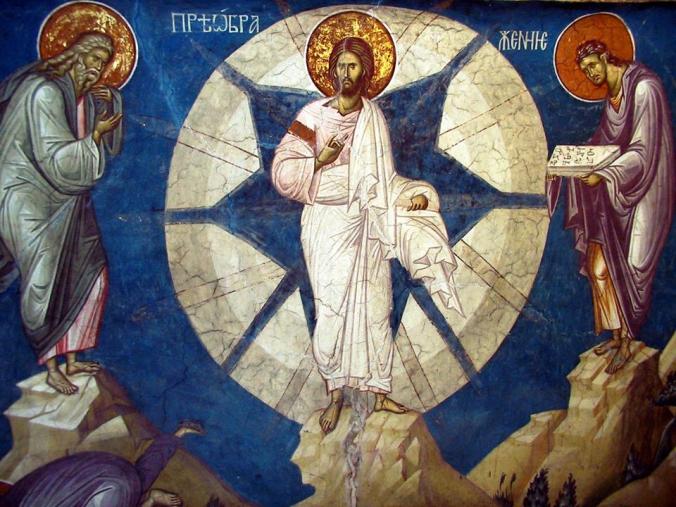 The Transfiguration of Christ in Decani Monastery (Kosovo, Serbia)

His face is particularly striking, expressing both divine power and human feeling.

Detail of the Transfiguration, Decani Monastery

Probably the most famous example of hesychastic influence in the iconography of eastern Christendom is found in Russia, however, during the fifteenth century. Andrey Rublev, considered by many to be the greatest iconographer ever, produced numerous works expressing the faith that through the incarnation of Christ humanity has been elevated to a truly exalted and glorious condition. Andrey’s Christ Pantokrator (Christ All-Mighty), rescued in the twentieth century from destruction by the Communists (it was said to have been lying on a woodpile awaiting the stove), represents the divine glory of God, but at the same time the transfigured human nature he assumed through the incarnation. 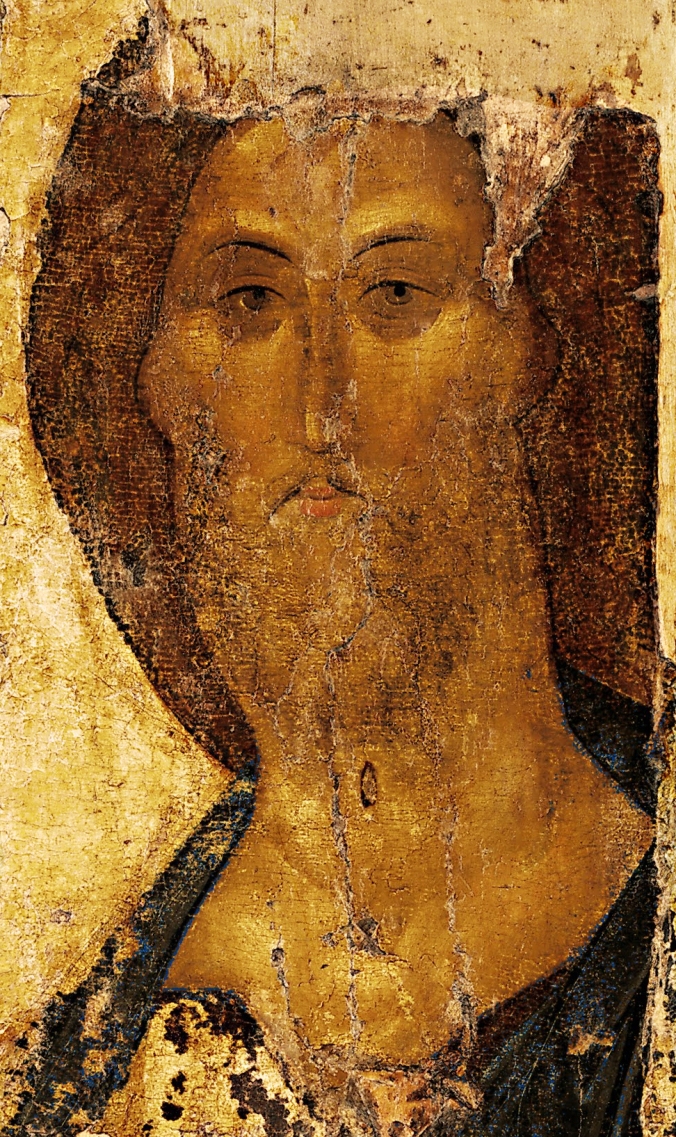 Christ’s face, rather than express a distant, severe deity contemplating punishment and ruin for the sinner, pours out love and mercy in an expression of gentleness and patience. It is the image of divine humility, of an act of self-emptying by the incarnate God of love. And because of this love, man is raised up into the divine life.

Some art historians have characterized hesychasm in eastern icongraphy as a form of humanism, insofar as it depicted the human experience–the body, the emotions, colors–belonging to this world. This is misleading. Hesychasm did indeed celebrate the human experience in this world, but it did so only as one transfigured by the immediate presence of God. It was something very different from humanism as it is usually understood, as the dominant movement of western anthropology since the time of the Renaissance.

And since I mention the Renaissance, it is time to return to the west, where Petrarch, fresh from his studies with the anti-hesychast Barlaam, is preparing the humanistic program that will, for centuries to come, shift the experience of Christendom from paradise to utopia.

3 thoughts on “Why Hesychasm Mattered”