In two weeks, Orthodox Christians throughout what was once the Soviet Union will be celebrating the memory of the New Martyrs and Confessors of that land (those following the Western calendar in America and elsewhere celebrated the event yesterday). These people were killed for their faith between the Bolshevik Revolution in 1917 and the collapse of Communism in 1991. Recognized as saints since 1982 by the Russian Orthodox Church outside of Russia, they were eventually canonized in Russia by the Patriarchate of Moscow in 2000. That event itself was a symbolical milestone in the history of Christendom, for it represented the restoration of traditional Christianity to a place of vitality within our culture. END_OF_DOCUMENT_TOKEN_TO_BE_REPLACED

The Christendom of the late-medieval west was a soil desiccated of the experience of paradise. Centuries of Roman Catholic piety had enriched this soil with faith in the kingdom of heaven, but not far below the surface there was an aridity that caused longing for a more immediate experience of it. Growing frustration was expressed in the period’s proliferation of mystics, and also in the life work of the man that would unintentionally inspire modern Europeans to depart from Christianity altogether, Francesco Petrarca, or Petrarch (d. 1374). END_OF_DOCUMENT_TOKEN_TO_BE_REPLACED

While the Wagnerian suicide of Adolf Hitler in 1945 may have been the perfectly consistent end of a modern nihilist (see my previous post), the death of Albert Camus in 1960 was not. 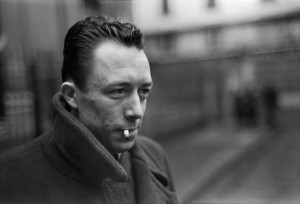 True, this great French novelist and philosopher–a recipient of the Nobel Prize in 1957–was fascinated with nihilism, and even spent a good part of his early career as an exponent of it. Convinced with fellow existentialists Jean-Paul Sartre and Simone de Beauvoir that God does not exist, he celebrated the absurdity of human action in the face of its resulting meaninglessness. An early work was The Myth of Sisyphus. For Camus the ancient figure of Sisyphus pushing a stone up a hill only to have it roll back down again–for all eternity–was the ultimate mythos of modern Christendom. For him, Sisyphus was a kind of post-Christian “hero of the absurd.”

Yet far more than his fellow existentialists, Camus was a dynamic thinker. He was never satisfied with his conclusions about the moral dilemmas of the modern west and progressively explored their root problems. This was the case with his fictional account of Nazi totalitarianism, a novel called The Plague. This beautiful book (one of my students once commented after reading it in our course that it made him “proud to be a human being”) took Camus beyond nihilism, back toward the central concerns of traditional Christianity.

Part of his inspiration was, interestingly, a lifelong attraction to Saint Augustine that contradicted his otherwise atheistic convictions. In the novel, evil is absurd, yes, and all-pervasive, but the protagonist’s response to it is not. A physician, he applies the cure of sacrificial love knowing that he can not completely annihilate the evil in this world, but knowing that he can prevent its triumph. Himself an atheist, the protagonist comes in spite of himself (and perhaps in spite of the author) to the remarkably similar conclusions of traditional Christianity. Indeed, some see Camus’s allegory of Nazism as a “proto-Christian” step in his intellectual development.

If so, his next work of fiction–and, alas, his last–went much further. The Fall is a very strange short book about a man who compulsively confesses his sins to a bartender. The man in question is a former judge, and an atheist. Or so he claims. Yet his preoccupation with a great sin he once committed reveals the weakness of his self-proclaimed nihilism, which he associates with Friedrich Nietzsche (who, it might be noted, was one of Hitler’s intellectual heroes). In the case of The Fall, Camus now takes his study of evil–what modern philosophers call theodicy–away from society and government and locates it . . . deep within the heart of the individual.

By this time in his career Camus had been visiting a Roman Catholic monastery off and on and was increasingly drawn to the values of traditional Christianity. It is significant that the sinner in the bar has the given name of Jean-Baptiste–John the Baptist, who once preached a “baptism of repentance.” His family name is also significant–Clamence, similar to “clemency,” or mercy and forgiveness. The problem is, he is an atheist. From whom does he need forgiveness?

Camus’s dynamic and honest struggle to confront the moral and philosophical problems of a post-Christian Christendom did not end with The Fall. Though self-consciously an atheist until the end, he continued to be drawn to the Christian anthropology of Saint Augustine.

Then, one day in 1960 he decided to accept the invitation of a friend to drive him to Paris by car. He would have preferred the train and had even bought himself a ticket. But nevertheless he agreed to drive. Along the way, the car went off the road and slammed into a tree.

Camus was killed instantly. At only forty six years of age, the restless philosopher who had traveled beyond modern nihilism into the heart of traditional Christianity might very well have gone further. It was a tragic end to a remarkable intellectual journey, and perhaps a truly absurd one as well. They even found the unused train ticket in his pocket.