When Lenin died of a stroke in 1924 the Communist Party was eager to immortalize him. The cult of Lenin that resulted went further than all earlier efforts in the history of Christendom–Christian or post-Christian–to glorify departed leaders.

The case of the United States is an interesting contrast. On the one hand, there were undoubted similarities. The “apotheosis of George Washington” depicted on the interior of the Capitol dome in a capital city named after the first president drew upon the pagan Roman practice of deifying departed emperors (that is, literally declaring them to be gods).

Washington was also glorified by a political culture in the early American republic that sought to create an almost mystical sense of his ongoing presence, expressed later by innumerable sites scattered throughout the eastern United States claiming that “George Washington slept here.”

The difference between the cult of Washington and that of Lenin, however, was not just that the one was committed to individual rights and the other to totalitarian dictatorship. What really made the difference was that while Washington showed relative indifference to traditional Christianity and seems to have favored its Enlightenment alternative of deism, Lenin was an atheist and intended to create a civilization of atheists. And it was this goal that colored the cultural revolution that gave rise to his posthumous cult.

Everywhere throughout the early Soviet Union the cult of Lenin was encountered. The former capital city of the Empire was named the City of Lenin (Leningrad). Other cities were renamed with variants of his last name. Statues of him became an ubiquitous sight in every major town, usually showing him gesturing with his right hand outstretched to the working masses. Lenin squares, Lenin streets, and Lenin Institutes appeared.

The most famous monument to the cult was Lenin’s Tomb, built in the middle of Red Square in central Moscow next to the Kremlin. 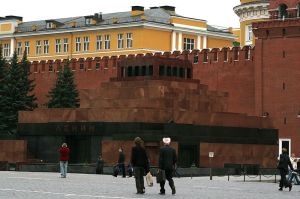 This massive structure, built in the modernist style, contained the bodily remains of Communism’s founder after scientists were done removing his brain (to be studied by future generations). For decades Lenin lay there for all to see, asserting, as it were, the poet Mayakovsky’s suggestion that “Lenin will always live” (see my previous post about that). Generations of Soviet citizens filed through long lines by the millions to get a glimpse of his body, to be near it. Many newly married couples would actually go directly from the marriage ceremony to the Tomb to pay their respects before celebrating or consummating their union.

For some, it was nothing short of a religious experience. And this, of course, is what the cult was all about. Unlike that of George Washington, the Lenin cult was designed to recreate what the Communist dictatorship was destroying in its cultural revolution: a system of beliefs and values that gave purpose to people’s lives and inspired them to transform the world around them.

In the next post, I will show a few very interesting ways in which the cult of Lenin served as an alternative religion for a society that was experiencing the violent elimination of Christianity.