Yesterday’s news of the killings at Umpqua College in Oregon included a detail that, if true, reminds us that even senseless acts of violence occur within a cultural context.

The murderer was reported to have asked his victims if they were Christians before shooting them in the head. Non-Christians and those that declined to answer were reported to have been shot in non-lethal areas of their bodies. There is no point in speculating about the motives of a psychopath, other than to observe that somewhere he acquired a conviction that Christians are a threat to the world in which he briefly sought to live. That “somewhere” is our post-Christian culture.

There are two thoughts that come to my mind in light of this.

First, how similar, on a comparably small scale, were the man’s actions to those of the Communists in Russia who gunned down their enemies. 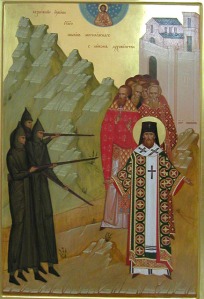 The shot to the head was a preferred method of execution in connection with the show trials under Stalin. The murderer yesterday even conducted a sort of trial by asking his victims to speak the truth about their faith. More broadly, the murder of Christians for their faith was common during the worst years of the Communist terror, as the secret police sought to eradicate all rival systems of beliefs and values in order to create a totally new post-Christian culture. As I noted yesterday, I’ll write more about the Soviet cultural revolution and the violence toward Christians that accompanied it in the posts ahead.

My second thought is related to the way in which the terrible news from Oregon speaks about the place of Christians in the world today. If, by God’s grace, we live in a country that protects the rights and lives of Christians, it is worth remembering that there are places that do not. In Syria and other parts of the Islamic world Christians are being persecuted and put to death for their faith this very moment. So are many Muslims. But the Christians are especially despised by groups like the Islamic State because they represent the “enemy” that fanatics need in order to nourish their hatred. 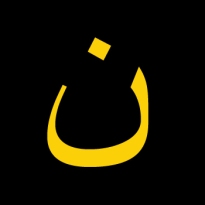 Arabic Letter “N” (for “Nazarene,” the Muslim name for Christian and used today to target those being persecuted)

They represent not only a totally different religion the existence of which threatens from within the Dar al-Islam, or House of Islam, a community comparable in some ways to politically developed Christendom. Christians in the Middle East are also hated for their association (quite incorrectly imposed on them by people who have little understanding of history) with the wars of western Christians against Muslims in the past.

The beneficial and ingenious political system by which we now live in the west protects Christians from this fate. But in our time it has also come to be a civilization in which to be a Christian in more than name can be very difficult, and on rare occasions (such as yesterday) actually dangerous.

We in the west live in Christendom, a civilization profoundly and perhaps permanently shaped by Christianity. But we live at a time in its history when a hostility to the beliefs and values of traditional Christianity has become increasingly normalized. The murderer of those people yesterday lived within a culture that has experienced neither Islamic law nor Communist terror, but it did train him to despise Christians.