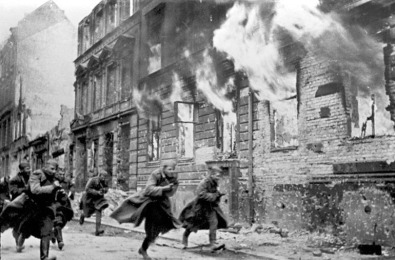 April, 1945 was not a good month for Hitler or the German nation he ruled. The Third Reich teetered on the brink of collapse and a national catastrophe loomed. As American soldiers fought their way across the Rhine River from the west, the Russians moved inexorably toward a doomed Berlin from the east. Soon the city Hitler had once dreamed of redesigning as a monument to Nazism would be reduced to rubble by the Red Army. Mere boys were conscripted to mount a hopeless defense and young women prepared for the worst at the hands of the approaching conquerors. The atmosphere was simply apocalyptic. And it was in exactly this atmosphere that a symbolic but unnoticed moment in the history of modern Christendom was played out.

Albert Speer, the evil genius of German wartime munitions production and a professional architect–indeed, the very man Hitler chose to give Berlin its modernistic face lift–organized one final, climatic performance of the city’s world-famous philharmonic. The event must have been surreal. He tells of it in his remarkable memoirs, Inside the Third Reich.  I always find myself fascinated by this work, written as it was by a man who looked over Hitler’s shoulder at some of the most important scenes in the history of Nazi Germany (he can be seen immediately to the Fuehrer’s right in the famous photograph taken before the Eiffel Tower after the fall of France).

The musical performance Speer organized as the capital was encircled served as a kind of artistic last will and testament of National Socialism. As such, it provided a kind of swan song or perhaps even final lullaby for the visionary Fuehrer who had now withdrawn underground into his bunker to prepare for the end, brooding over plans to kill himself.

What was Speer’s musical taste for such an occasion? What else could it be? Richard Wagner’s opera Goetterdaemmerung, or Twilight of the Gods. Wagner was, of course, the preeminent composer for Hitler, and the final opera in the series the Ring of the Nibelung contained an ending that was as nihilistic as Hitler’s vision of the world. I will have much to say about Wagner’s place in the history of Christendom in later posts. It is really quite significant. For the moment, it is striking how well the music suited that vision.

In the final scene of the work, the heroine Brunnhilde, who is herself preparing to commit suicide by riding atop the funeral pyre of her lover Siegfried, pauses for a moment to sing softly to her absent father, the impotent god Wotan. In fact she sounds more like a mother singing a bedtime lullaby to her child. “Ruhe, ruhe, du Gott!” she coos, “rest, rest, O god!” And then the ten-minute march toward the destruction of everything begins, as the Rhine River overflows and the palace of the gods, Valhalla, comes crashing down in flames. It is marvelous music, beautiful and stirring and, when put to use by the Nazis, chilling. If any of my readers has never experienced it, one particular good production (with Gwyneth Jones singing the lead) can be watched here. As the smoke rises on stage at the end of the  performance, the scene looks rather like what I expect Berlin did after its fall in 1945.

“Rest, rest, O god!” These words say quite a bit about modern Christendom. No longer convinced that a heavenly paradise can be attained in this world, no longer hopeful that a secular utopia can be built in its place, the values of twentieth-century Christendom found it difficult to resist nihilism. And in the case of the Nazis, to a horrendous degree.

And what was it like to attend that final concert in the doomed Nazi capital? One account related that when it was over, and the chords of one of modern Germany’s greatest musical compositions gave way to the distant thud of approaching tanks, a Nazi official was standing by to distribute cyanide tablets to Berlin’s true believers as they departed.

Was such a scene inevitable for a culture that had lost its moorings in both paradise and utopia?