In my previous post I noted that among several causes for radical Islam’s hatred of the west there is the legacy of the crusades, the series of wars fought by Christians against the Muslim Arabs during the middle ages.

It is striking that in the statement issued by ISIS following the recent attacks in Paris the authors claimed to be visiting a kind of revenge on what they called “crusaders.” It is obviously a fantastic stretch of the imagination to equate the average Parisian of the twenty first century with the crusaders of the twelfth and thirteenth centuries. The difference in mentalité could not be greater. END_OF_DOCUMENT_TOKEN_TO_BE_REPLACED

Less than a week ago, Muslim terrorists attacked and killed more than a hundred people in Paris, leaving many more wounded and suffering. France, recently distinguishing herself as aloof from America’s “war on terror,” has now (in the words of President Francois Hollande) declared herself “at war” with ISIS. French jets have begun to bomb military targets in Syria to defend France and the west from radical Islam.

Indeed, not only the west but the world community has expressed deep sympathy for France, reminding one of the global expressions of solidarity with the United States in the aftermath of the September 11 attacks. 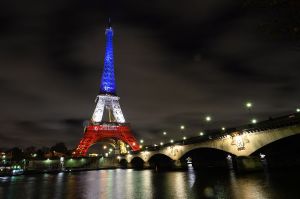 The United States and France, along with the west as a whole, have much in common. We are hated by Muslim extremists.

Apart from the psychological fact that fanatics always need someone to hate, the following are three particularly apparent reasons: END_OF_DOCUMENT_TOKEN_TO_BE_REPLACED