Since my last post in the aftermath of the Parish shootings a new atrocity has been committed by Muslim radicals, and this time in America. The married couple who massacred fourteen people in San Bernardino, California, did so in the name of ISIS, at least according to this morning’s news. 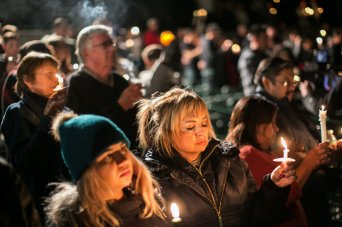 Regardless of their motivation (which may never be fully known), reports further reveal a “gleeful” response on the global internet in recent days by ISIS supporters, some of whom, once again, identify the victims of this attack (and who were doing nothing more threatening to Islam than attending a holiday party) as “crusaders.”

As I’ve said in earlier posts, there is no point in taking the ravings of fanatics too seriously. But the readiness of terrorist sympathizers to affiliate the San Bernardino victims with the crusades, those Christian wars against Muslims nearly a thousand years ago on the other side of the planet, reminds us of the need to keep our historical memory clear of errors.

So, let me say three things about the crusades that will clarify their significance for the identity of the west and Christendom generally.

The fact is, Orthodox Christendom has never supported the concept of holy warfare, or killing in the name of God. There have been plenty of atrocities and abominations committed by Orthodox Christians over the centuries. But the Orthodox Church has never formally launched a crusade. As a matter of fact, her faithful were more than once victims of them. (To learn about the Roman Catholic crusades against Orthodox Christians, readers can listen to my podcast episode here). Nor, it bears emphasizing, has she ever instituted an inquisition to persecute and punish heretics. Nor has she fought religious wars against schismatics such as occurred in the horrible “wars of religion” between Roman Catholics and Protestants for two centuries in western Christendom on the eve of the Enlightenment, and which contributed significantly to the loss of confidence in Christendom and the rise of a modern effort to secularize it.

But that is another story, to be discussed in another post.